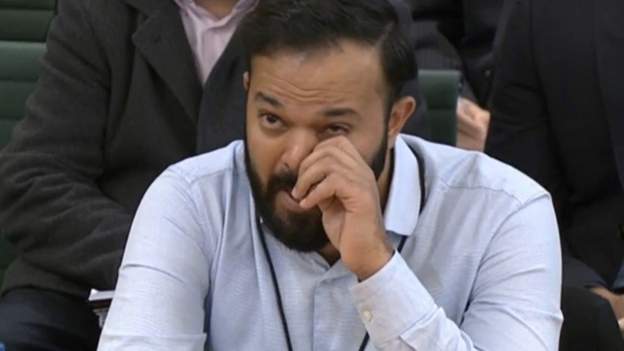 Rafiq, 30, told a Digital, Culture, Media and Sport select committee that racist language was «constantly» used during his time at Yorkshire.

In an emotional testimony, he also said the club gave him «inhuman» treatment after his son was still-born in 2017.

He added the issues he faced at Yorkshire are «without a shadow of a doubt» widespread in domestic cricket.

Rafiq said he had lost his career to racism, which is a «horrible feeling» but that «hopefully» by speaking out there will be «massive change in five years’ time».

«All I wanted was an acceptance, an apology, an understanding, and let’s try and work together to ensure it never happens again,» he continued.

«I was not going to let this go, no matter how much damage it causes me – I was determined to become a voice for the voiceless.»

Scale of racism in cricket is ‘scary’

Rafiq was giving evidence to MPs after a report found he was a victim of «racial harassment and bullying» but the club said they would not discipline anyone.

Hutton, who offered his «profound apologies» to Rafiq, said Yorkshire’s director of cricket Martyn Moxon and former chief executive Mark Arthur «failed to accept the gravity of the situation».

«They have not wanted to apologise or take the recommendations of the panel going forward,» he added.

When asked by Damian Green MP if he thought cricket was institutionally racist, Rafiq replied: «Yes, I do.»

In response to a question by Julian Knight MP, chair of the DCMS select committee, on whether the issues he faced were «replicated» at other counties, Rafiq said: «It’s a problem up and down the country.»

Former Yorkshire academy players Irfan Amjad and Tabassum Bhatti have alleged they received racist abuse while at the club.

Essex are facing racism allegations and encouraging those that have experienced discrimination to come forward.

Last week Essex chairman John Faragher resigned following an allegation he used racist language in a 2017 board meeting, which he denies.

Former Essex players Zoheb Sharif and Maurice Chambers have both alleged they suffered racist abuse at the club.

Rafiq said the scale of the problem is «scary» and there have been «denials, briefings, cover-ups, smearing».

He claimed that British Asian representation in professional cricket since 2010 had dropped nearly 40% and that England have missed out on «a hell of a lot of talent» because Asian and black cricketers have been subjected to racism.

Rafiq also called on the ECB «to make tangible change».

«What is most troubling is that what Azeem Rafiq has experienced is not an isolated incident, in cricket or across sport more generally,» he added.

«Azeem Rafiq’s bravery in speaking out against those who abused him needs to be a turning point – this is an opportunity to stand in solidarity with Azeem and run racism out of sport, once and for all.»

Yorkshire chairman Lord Patel said it was an «incredibly difficult day» for all at the club and that Rafiq’s testimony was «harrowing and upsetting».

He added: «There is no quick fix to the clear problems which have been identified, and the issues are complex, not least the charge of institutional racism which must be addressed head on.»

Rafiq said he was subjected to «inhuman» treatment after the death of his son, because the club were «blinded» to how they should treat him after he raised a complaint about former England player Tim Bresnan in 2017.

Rafiq said that the day after his son died, Moxon «ripped shreds» off him in a manner he had never seen Moxon use when addressing anyone else at the club.

He said he was part of a group of «six or seven» players who complained about Bresnan, who now plays for Warwickshire, after which he said the club saw him as a «trouble-maker».

He added he was the only player of colour in that group and was «the only one to get repercussions».

Rafiq added that head coach Gale’s attitude towards the death of Rafiq’s son was that Rafiq was «making it more than what it is», and that «hardly anyone» asked after his and his wife’s wellbeing.

At the end of his session, Rafiq said his wife «has struggled and still continues» to and that his two young children «have not had a dad, really, because all I have been worried about is Yorkshire going out to discredit me and how I am going to deal with it».

He added: «It has been challenging, but I hope today provides some sort of closure and I can treat her for what she deserves.»

Warwickshire said the report includes allegations of bullying against Rafiq by Bresnan regarding comments Bresnan made about Rafiq’s weight.

They said: «We have spoken to Tim about this and he admits making such a comment. We understand there was no substantiated suggestion of racism against Tim, but he is devastated to learn of the impact of his comments.»

Bresnan responded in a statement, stating: «I have been made aware of the bullying claims made against me and have listened to Azeem Rafiq’s account of his time at Yorkshire CCC today with great distress, as I’m sure everyone will have done.

«For any part I played in contributing to Azeem Rafiq’s experience of feeling bullied at Yorkshire, I apologise unreservedly.»

Gale is currently suspended as part of an investigation into a tweet he sent in 2010.

Moxon is currently absent from work because of a «stress-related illness» and Yorkshire said he «will be given the necessary support».

Yorkshire batter Ballance, who played 23 Tests for England, said earlier this month he «regrets» using racist language towards Rafiq, who he regarded as his «best mate in cricket».

Rafiq said he became friends with Zimbabwe-born Ballance when he joined Yorkshire from Derbyshire in 2008 because he felt he was an «outsider» as well and that others called Ballance «things that were out of order».

But he added their relationship «started to deteriorate» around 2013 because of Ballance’s «conduct» and that his «behaviour was so disgusting» Rafiq raised it with an agent they shared.

Rafiq said they remained «amicable» but not close afterwards and that Ballance found the captaincy a «real struggle» in 2017, resulting in a «toxic» dressing room.

He added that Ballance used the name ‘Kevin’ as a «derogatory» term to refer to any player of colour and this was an «open secret», including within the England dressing room.

«It’s disgusting how much of a joke it was,» said Rafiq.

He added that India batter Cheteshwar Pujara was called ‘Steve’ by coaches, players and the Yorkshire website after bowler Jack Brooks, who now plays for Somerset, started calling Pujara that because he could not pronounce his first name.

Pujara said he did not like being called Steve and would prefer his team-mates to call him Cheteshwar.

BBC Sport is approaching Hales and Brooks for comment.

Somerset said they «take a zero-tolerance approach to any form of behaviour which is anything other than inclusive for all, regardless of gender, race, sexuality or any other characteristic».

They added: «Any case reported will be thoroughly investigated as it is important that we learn lessons from the past and we welcome any information on incidents that may have occurred to help us do so.»

Rafiq’s response to other Yorkshire figures

Rafiq alleges former England captain and BBC cricket pundit Michael Vaughan said «too many of you lot, we need to do something about it» to him and three other Asian players in 2009 while they were all at Yorkshire.

«It’s important on Michael that we don’t make it all about Michael,» said Rafiq.

«It was a long time ago. He might not remember it because it doesn’t mean anything to him.»

England Test captain Joe Root said the Yorkshire racism scandal has «fractured our game and torn lives apart» but that he could not recall any instance of racism during his time at the club.

Rafiq said Root has never used racist language but he found his statement «hurtful» because Root was Ballance’s housemate and was on nights out when racist language directed at his Pakistan heritage was used.

«Joe might not remember it but that shows just how normal it was – even a good man like him can’t see it for what it is,» he said.

«The environment and institution is the problem.»

Rafiq said that following an interview on Sky, former England bowler and Yorkshire team-mate Matthew Hoggard called him and said «I am sorry if some of the comments made you feel how you described it».

Rafiq said he thanked Hoggard for his apology and really appreciated it.

Rafiq also said that Sky Sports commentator David Lloyd, a former Lancashire captain and England player and later coach, had made disparaging comments about Asian cricketers after Rafiq spoke about his experiences on television.

He said there were «high-profile» media people «messaging other members of the media who have supported me, saying stuff like: ‘Well, a clubhouse is the lifeblood of a club, and Asian players don’t go in there.'»

In response, Lloyd said he had «made some comments about the Asian cricket community» and that he «deeply regrets» his actions.

«I apologise most sincerely to Azeem and to the Asian community for doing this, and for any offence caused,» he added.

Sky said in a statement it was «investigating the comments» attributed to Lloyd and that it was «committed to actively championing inclusion in cricket – and in all sports – and opposing all forms of discrimination».

Rafiq first spoke out last year, claiming «institutional racism» at Yorkshire left him close to taking his own life.

Seven of the 43 allegations were upheld by an independent panel last month and the report found he had been a victim of «racial harassment and bullying» at the club.

However, Yorkshire said they will not take disciplinary action against any player, employee or executive.

Hutton and Arthur have subsequently resigned, with Hutton’s replacement as chairman, Lord Patel, apologising «unreservedly» and settling the employment tribunal with Rafiq.

Yorkshire have been suspended from hosting international matches by the ECB.

BBC Sport is approaching Yorkshire for further comment in response to today’s evidence.