Premier League and government urge footballers to get Covid-19 vaccine

The Premier League and UK government have urged footballers to get vaccinated against Covid-19.

Half this weekend’s top-flight games have been postponed because of outbreaks of the virus at clubs.

In the English Football League – where 25% of players say they do not intend to get the jab – 19 fixtures due to be played on Saturday have been postponed.

«Getting the jab is the socially responsible thing to do,» Sports Minister Nigel Huddleston said.

«The most important thing anyone – including footballers – can do to protect themselves, co-workers and loved ones is to get vaccinated and get a booster.

«I know the football authorities are also working with players to understand why some are vaccine hesitant.»

Liverpool boss Jurgen Klopp believes getting a vaccination should be mandatory «from a moral point of view» and revealed «99%» of his squad have had both jabs.

«It’s a question of persuading,» he said. «If I do something that helps the people around me then for me that’s mandatory – but obviously some people see that differently.

«I’m 54 years old and I am really a big believer that you can convince people about the right things to do but I’m not sure in this specific case.»

The most recent data from the Premier League, published in October, revealed that 81% of Premier League players had had at least one jab, while 68% had been given two doses.

Unvaccinated people who are deemed a close contact of someone who has tested positive for coronavirus must self-isolate for 10 days under the legal requirements set out by the UK government.

Premier League chief executive Richard Masters has written to all member clubs asking them to «strongly encourage» players to get vaccinated.

«We have collectively highlighted the importance of vaccination and it has never been more important,» he wrote.

«Please strongly encourage those who are not fully vaccinated to become so, and the many who are, to get their booster, which appears to be the only significant layer of protection against the Omicron variant.»

Why are some players not getting vaccinated?

Some people choose not to be vaccinated, citing a number of factors, including their lack of confidence in the vaccine, concerns about side effects, or a fear of needles.

Others – a minority – opt out of vaccination because of their consumption of misinformation and conspiracy theories online, particularly on social media.

Crystal Palace chairman Steve Parish says he understands some players have their own concerns about getting the jab but believes the vaccination rate compares favourably to the rest of society in the same age group.

Across England the vaccination rate for under-40s is below 75%.

‘Players are no different to people in society in that age group – some people have their own views and concerns,» Parish told BBC Breakfast.

«We have a very high vaccination rate – I think – in the Premier League for the age group that players are compared to the rest of society.

‘But there are players who have concerns – medical issues which mean they can’t get vaccinated in the same way, or just individual or family concerns. We have to work through those and do our best.»

Former Premier League doctor Matthew Ogunsanya told BBC Radio 5 Live: «I think it is simply a case of perceived risks versus the benefits.

«Ultimately you have to ask the question why do some players see the risk of the vaccine and why don’t they see the benefits of it? The reasons for that will vary.»

The Premier League, EFL and the Professional Footballers’ Association have arranged for players to meet with England’s deputy chief medical officer Prof Jonathan Van-Tam to discuss concerns regarding the vaccine. 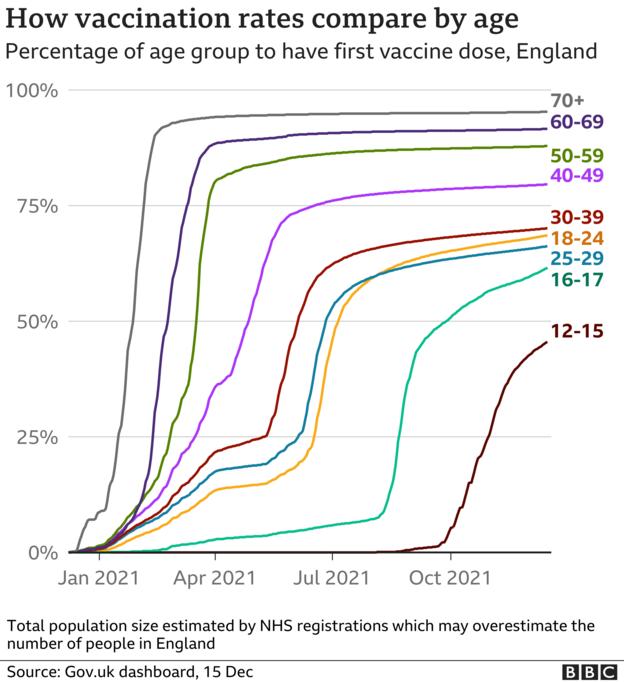 Former Scotland and Chelsea winger Pat Nevin says he is angered by those players who are not getting vaccinated.

«I can’t see the honesty in it,» he said on BBC Radio 5 Live’s Football Daily podcast. «I’m not convinced unvaccinated players should be allowed to carry on playing as it’s unfair on the other players.»

What do the managers say?

He used his programme notes before Thursday’s 3-1 win against Newcastle to encourage people to get vaccinated, writing: «If I come across friends or people I care about in my life away from football and they tell me they haven’t had a jab yet, I do my best to encourage them to listen to experts.

Manchester City boss Pep Guardiola has long spoken up in favour of getting the vaccine, saying previously: «I think the doctors, the medical department can do it, so the players have to know that is [to] protect them, family and the rest of society. But no-one can obligate them to do it.»

Arsenal boss Mikel Arteta, who contracted the virus in the early stages of the pandemic, said he has encouraged his players to get the vaccine.

«The doctor has done a really good job to try to explain to everyone – because culturally as well there are a lot of thoughts around it,» he said.

«We just try to educate them to try to encourage them to make the decision, but first of all they have to believe in that.»

Tottenham boss Antonio Conte said he would like his players to get vaccinated but would not force anyone to do it.

«Honestly, this is a personal matter, the vaccination,» he said.

«I’ve been vaccinated and my family, my daughter and wife, did the same. I’d like that other people do the same but every single person needs to take the best decision for himself.»

Matt Taylor, manager of League Two side Exeter City told BBC Sport he would not be influencing any of his players to get vaccinated, stressing it was «their decision».

«From my discussions with players who haven’t had the vaccine, there’s a lot of influences, and they’re understandable,» Taylor said.

«Whether it be things in terms of enlarged organs, heart problems, respiratory problems, possible fertility issues, they’ve got a whole host of questions which come up and often remain unanswered.

«Sometimes people think it’s a straightforward decision as to whether you do or don’t get the vaccine. But it’s not as easy a decision because everyone’s circumstances are totally different.»

Could rising cases cause the season to be put on hold?

Nine Premier League games have been postponed over the past week and there have been calls for the season to be paused until 26 December to enable clubs get control of the situation.

Brentford boss Thomas Frank suggested on Wednesday that all games are called off until 26 December to enable a reset.

However, Liverpool boss Klopp says he cannot see the benefit of stopping the season.

Premier League clubs will meet on Monday to discuss the escalating crisis around the coronavirus pandemic, with managers and captains also meeting later in the week. The league’s governing body says it intends to carry on playing matches as long as it is safe to do so.