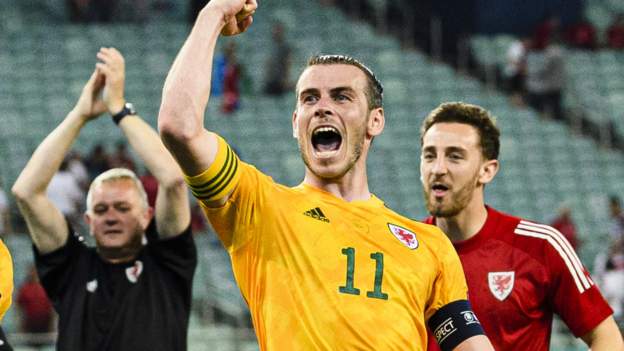 Wales are within touching distance of the Euro 2020 knockout stage as they visit Rome for their final group game against an Italy side in ominous form.

Italy are unbeaten in 29 matches, winning their previous 10 without conceding a single goal.

They are already through to the last 16 having won their first two games, while Wales have all but guaranteed their passage with four points so far.

«Even if that record wasn’t there, Italy are a big footballing nation and always make games difficult.

«It would be a great result if we could win. Our aim is to win the game – none of us ever go into a match to get a draw. We have a gameplan which we think can hurt them.»

Having drawn with Switzerland and beaten Turkey, if Wales draw in Rome they will finish second in Group A and play a second-round match in Amsterdam against Group B’s runners-up.

Even if they lose, Wales could still finish second. But if they lose and Switzerland beat Turkey – with a significant swing in goal difference in the process – Robert Page’s side could finish third. However, four points would still almost certainly be enough to see them through to the last 16 as one of the tournament’s four best third-placed teams.

But if Wales inflict on Italy a first competitive home loss since 1999, they would win the group and play their next game at Wembley against Group C’s runners-up.

With only hundreds of Wales fans able to attend their matches in Rome and Baku so far, a trip to Wembley could see the Red Wall return in their thousands.

«I think for the Welsh fans to be able to come and watch us is definitely something we would love to see,» said Bale.

Italy manager Roberto Mancini said: «Wales are a very difficult team to face because they’ve been right up there in the Fifa world rankings for a number of years. That shows they have quality players.

«They are a British team and have a lot of physicality.»

When Mancini was asked if that physicality reminded him of playing against Stoke City when he was Manchester City manager, he laughed and said: «Stoke was a tricky place to go to.

«But Wales have players like [Joe] Allen, Bale, [Daniel] James – skilful, quality players so it will be a difficult match from a physical perspective. Wales are not only technical, but powerful on the physical side.»

When Bale was asked about the comparison, he said: «I never knew Stoke were that good!»

Wales and Italy in particular are expected to make changes for their meeting in Rome.

Page has hinted he might manage the workload of some players who were fitness concerns in the build-up to the tournament, such as midfielders Aaron Ramsey and Joe Allen.

Defenders Chris Mepham and Ben Davies and striker Kieffer Moore have all received yellow cards at Euro 2020, one away from a suspension.

«That’s the difficulty. We’ve been here before in the semi-finals in 2016 and missed influential players [Ramsey and Davies] and it’s affected them until today,» said Page.

«Of course that’s going to be part of the thought process but, more importantly, we’re playing against a very good Italian side.

«We have to take that into consideration. A team will be selected that we believe can win the game.»

With Italy’s place in the second round already guaranteed, Mancini is reportedly considering making as many as five or six changes.

Captain Giorgio Chiellini is out injured, so Lazio’s Francesco Acerbi is expected to take his place in central defence. Chiellini’s injury is not thought to be serious and he should be fit for Italy’s last 16 tie next Saturday.

Mancini could also recall forwards Andrea Belotti and Federico Chiesa in order to give the likes of Ciro Immobile a rest.