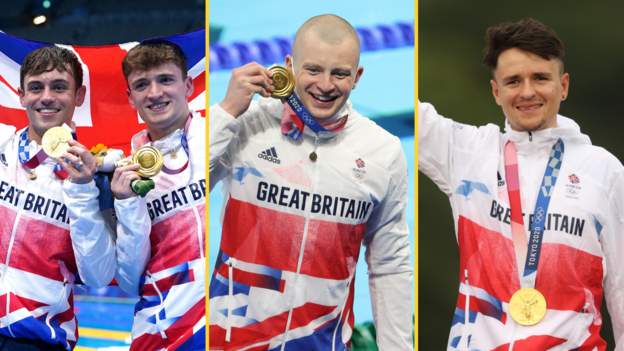 Britain’s Daley and Lee edged out China for victory, 13 years after 27-year-old Daley – a two-time bronze medallist – made his Olympic debut in Beijing.

In the early hours of day three, swimmer Peaty had become the first British swimmer to defend an Olympic title with his dominant victory in the 100m breaststroke.

Less than half an hour after Daley and Lee’s gold, cyclist Pidcock added a third to Team GB’s tally, dominating the men’s cross-country mountain biking.

Earlier, Britain’s Alex Yee cemented his position as the new star of British triathlon with a silver medal, as Jonny Brownlee placed fifth.

In taekwondo, Lauren Williams is through to the final of the women’s -67kg, guaranteeing herself a medal. She will take on Croatia’s Matea Jelic at 13:30 BST.

Olympic organisers say a tropical storm will hit Tokyo tomorrow, but it is not expected to cause much disruption to the Games.

Rowing and archery events have already been moved because of the anticipated strong winds, but there are no plans to make any other changes to the schedule unless the forecast alters.

Here’s some of what else you’ve missed on Monday morning:

Daley was just 11 when he told the BBC: «I want to get to the Olympics and win a gold medal.» Sixteen years on, that dream is now a reality.

Daley and Lee – who, at four years his diving partner’s junior, was making his Olympic debut – performed impeccably throughout the synchronised 10m platform event, moving top of the leaderboard after four dives.

They finished with a total score of 471.81, leaving China’s Cao Yuan and Chen Aisen with too much to do and they took silver with a tally of 470.58.

«We are the ones to beat, and they’ve got to come and get us. I still honestly can’t believe what’s happening. I didn’t even think I was going to get here in the first place, but here we are,» said Daley.

Victory was all but secured for Peaty before he even entered the water, given he has not lost over 100m for more than seven years, including his first gold in Rio five years ago.

Though he was unable to break his own world record of 56.88 seconds in Tokyo, he still finished more than six tenths of a second quicker than the Netherlands’ silver medallist Arno Kamminga, with Italy’s Nicolo Martinenghi taking bronze.

Peaty touched the wall in 57.37, the fifth fastest time in history, but compatriot James Wilby could not join him on the podium, finishing in fifth place.

Peaty has won the 100m breaststroke at the last three World Championships, has broken the world record five times and is the only man to have ever swam it in under 57 seconds.

«I haven’t felt this good since 2016. It just means the world to me,» said the 26-year-old. «I thought I had the best preparation in my life but then you throw in morning finals, and you throw all that out the window.

«That’s really what it takes to be an athlete. It’s not who’s the best all year round, it’s the best person on the day who’s the most adaptable and really who wants it more.»

Cyclist Pidcock had prepared for Tokyo’s brutal temperatures by training in a heated tent at home and it paid off.

He finished 20 seconds clear of the rest of the field in Izu, with Swiss world number one Mathias Flueckiger taking silver and David Valero of Spain winning bronze, to take Britain’s first gold in mountain biking.

The 21-year-old, who has world titles in cyclo-cross, road and mountain bike events at under-23 level, had surgery on a broken collarbone at the start of June but returned to training just six days later.

When asked how it felt to win gold, Pidcock told Eurosport: «Not real really. It’s pretty crazy that I became an Olympian and I was trying to tell myself at the start of the race it’s special just to be here.»

Alistair and Jonny Brownlee have long been British triathlon’s golden boys, but in winning Olympic silver, Yee – who previously trained with the brothers – well and truly stepped up to take over the baton.

Competing in just his eighth race at this level, he led for much of the 10km run before Norway’s Kristian Blummenfelt produced a stunning breakaway in 27C heat and high humidity to win gold.

The event – which was moved to the early hours in Tokyo to avoid the worst of the heat – had to be restarted after a boat blocked around half of the athletes as they entered the water.